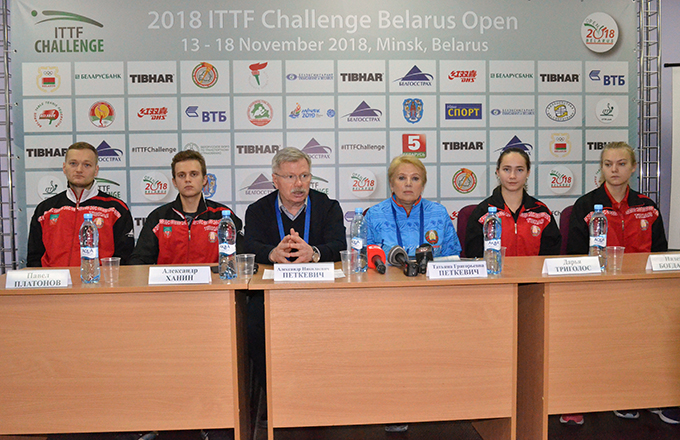 A press conference devoted to the Belgosstrakh Belarus Open was held at the Republican Center on Olympic Preparation in Table Tennis. It was attended by Alexandre PETKEVITCH, the President of the Federation, Tatiana PETKEVITCH, the senior coach of the women's national team, as well as athletes Alexander KHANIN, Pavel PLATONOV, Daria TRIGOLOS and Nadezhda BOGDANOVA.

Alexandre PETKEVITCH began the press conference. He noted: “The organization of the tournament this year is higher than in all previous years, you may see it soon. The qualification will be held on 16 tables, and the main draw will be played on 4 show courts, in the same format as at the 2nd European Games.

The Belarus Open is already being hosted for 11 times, but this year there will be a lot of innovation for tournament participants: “For the first time in the entire history of the tournament, we use two buildings. The warm-up area is located at the RCOP in table tennis, and the playing hall is located at the Palace of Tennis. In order to protect athletes from the bad weather, and for feeling more comfortable, we use a large tent. From the first day we will broadcast four playing tables on the Internet. And in many other aspects we tried to do everything qualitatively and fulfill all the requirements.

In my opinion, today we can say that we have coped with the task - prepared as it should be. I hope that we will get a good evaluation for the organization of these competitions, it remains only to host a quality tournament. Following the results of the Belarus Open, we will make some adjustments to the preparation for the second European Games and will conduct them with dignity, quality and all the teams that come to us will be satisfied with the conditions».

Tatiana PETKEVITCH told about the readiness of our athletes: “I hope that our athletes will perform with dignity. They are well prepared, the most important thing is that they are healthy, their mood is good and fighting. It's nice that Daria TRIGOLOS, who because of illness did not participate in the European Championship, has recovered and gained good form. We will all try».

Alexandre PETKEVITCH noted the fact that all our athletes begin their performance immediately from the main draw, and do not play in the qualification: “This is not a tribute to the hosting organization, themselves through their rating they were among the seeded players, and they will start the competition on Thursday».

Journalists didn’t ignore the issue of absence of Vladimir SAMSONOV and Viktoria PAVLOVICH in entries for the Belgosstrakh Belarus Open.

«Unfortunately, they will not be able to participate in the tournament. Alexandre PETKEVITCH explained this is due to the fact that the dates for Belarus Open coincided with the next round of the Champions League and European Cup. Viktoria and Vladimir play in the above competitions. Although they wanted to play at the Belarus Open, but unfortunately the Champions League did not allow them to do so».

Despite the above mentioned fact, Alexandre PETKEVITCH noted the strong teams of the participants at the tournament this year: “Traditionally, a lot of Japanese come to us. This year we also receive entries from the large delegations from China and South Korea. The most promising athletes from various provinces of China came to us. We have the same situation as in 2008, when a lot of participants arrived without a rating, completely unknown, as for example Xu Xin. After that, this athlete began climbing to the first line in the world ranking. I think this situation can happen this year».

For Pavel Platonov to compete in the Belarus Open is always a little more responsible than abroad: “Any competitions that are held at home are responsible for any athlete. Since these competitions are held a year before the II European Games, this gives additional motivation. I want to please myself, fans, coaches».

Photos from the press conference