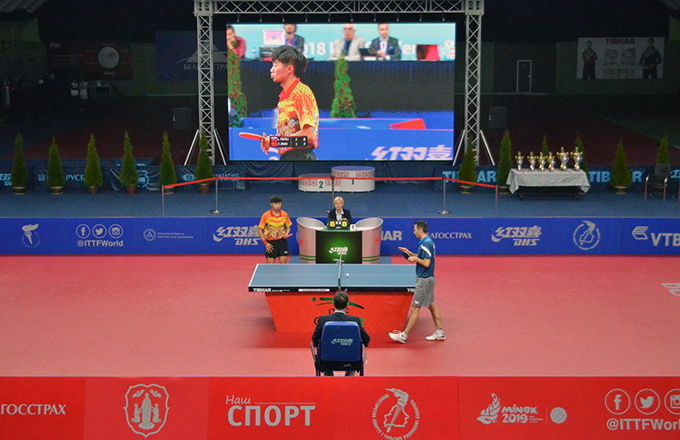 2018 ITTF Challenge, Belgosstrakh Belarus Open was held in the Palace of Tennis from November 13 to 18. This year the traditional tournament has acquired a new status of a test event for the II European Games 2019.

From June 21 to 30, the Republic of Belarus will be a home for competitions among the European players. European Games are held once every four years under the leadership of the European Olympic Committee.

Following the results of the Belarus Open, the President of the Belarus Table Tennis Federation Alexandre PETKEVITCH has noted that we are almost ready to hold table tennis competitions as a part of the II European Games: « It remains to modify some of the nuances, such as the conditioning of the main halls, the raising of the flags during the award ceremony. The ETTU technical delegate Oivind ERIKSEN and a representative of the European Olympic Committee noted the good organization of the championship. They are sure that everything will also be successful at the Games. They have made some recommendations that are easy to implement».

We should just bring back that totally competitions in 15 kinds of sport will be held in the framework of the II European Games. The table tennis tournament will be held from June 22 to 29 in the Palace of Tennis. 128 athletes will compete in Minsk to win five sets of medals.

Our country is guaranteed the following number of quotas:

Winners, runner-ups and semifinalists of the II European Table Tennis Games in the Men's and Women's Singles Events will receive direct passes to the 2020 Olympic Games in Tokyo, Japan. Winners of Team Events and Mixed Doubles Event of the II European Games will also automatically qualify for the main start of the four-year period.